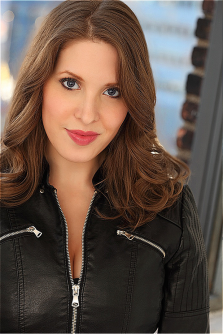 Danielle has a BFA in Acting from Hofstra University and is SAG-AFTRA Eligible and an Equity Membership Candidate (EMC).

You may have seen Danielle on the Silver Screen, Amazon Prime, and Tubi in:

She also portrayed 'Sylvia' in the Feature Film THE CANFATHER.

Children's Theatre: THE ENERGIZED GUYS TOUR as 'Nikki Neutron', ALICE IN WONDERLAND as 'Caterpillar/Mother/Dee', TREASURE ISLAND as 'Beryl', SNOW WHITE AND THE SEVEN DWARFS as 'Evil Queen', THE WIZARD OF OZ as 'Cover/Performed- Wicked Witch', THE TALE OF THE LITTLE MERMAID as 'Cover/Performed- Earl the Eel'.

Danielle has Understudied in: I LOVE YOU, YOU'RE PERFECT, NOW CHANGE as 'Woman 1 & 2', and STEEL MAGNOLIAS as 'Annelle'.

You may have seen Danielle in Advertisments for: VISITPHILLY.COM, VISIT BUCKS COUNTY, GQ: THE JOEL EMBIID 360 DEGREE EXPERIENCE.

Although not in the medical field Danielle has portrayed multiple healthcare roles as: 'Doctor', 'Nurse', 'Patient', and 'Pharmaceutical Rep'.

Danielle has Modeled for Runway, Print, and Promotions with: KERANIQUE, PUREOLOGY, and NOLCHA.

Although Danielle prefers being in Front of the Camera and On the Stage she is also a Teaching Artist. Teaching at: Theatres, Schools, Camps, Workshops and Competitons.

That's just a bit about Danielle...